IN THE HOUSE Speech NDP Opposition Day Motion on Pharmacare 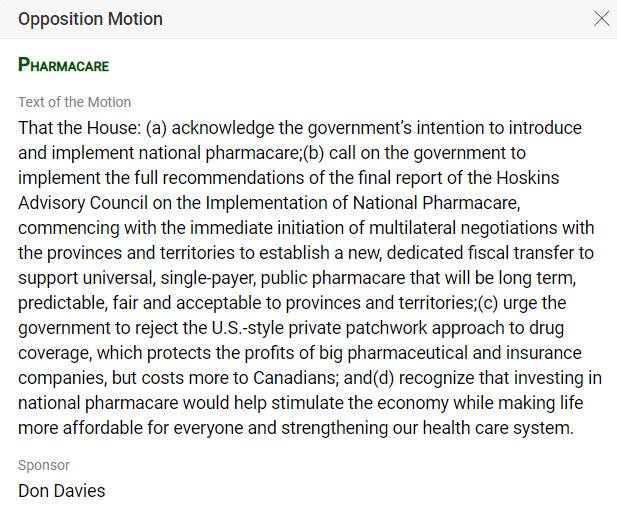 We are facing a pandemic around the world. I think an illustrative part of why we are calling on Parliament today to ratify the idea of a universal public pharmacare program is seen when we look at how our universal medicare is working. We can see a clear difference between a Canadian-style medicare, where we have managed to keep the risk of COVID-19 low, and to have public health officials across the country working hard to maintain that level, and in other jurisdictions, for example in the United States, where their medical system is neither universal nor publicly administered. As a result of that it is much more costly than in the Canadian context.

When we compare the infection rates of COVID-19 in British Columbia, where the B.C. NDP government, John Horgan and the public health officials have been working hard to contain the virus, to Washington state, right across the border, two hours from my home and my constituency, we are seeing brush fires erupting in the area of Seattle. In Lynnwood for example, we have progressively seen schools closed, churches closed and not celebrating mass or communion, and a series of senior centres that have had to be closed. The difference is quite clear. That is part of why, in Canada, it is so essential that we have access to the health care system at all times, without having to worry about having to pay or whether our families have the capacity to pay.

It is the same principle with pharmacare. This is why this debate is so vital today. As parliamentarians, for almost a quarter century we have had Liberal governments promising to deliver pharmacare. The choice needs to be made between a Canadian style, universal, publicly administered pharmacare program as called for in the Hoskins report, as called for unanimously by the Standing Committee on Health, and as called for by the Standing Committee on Finance in our report that we tabled just two weeks ago, calling for a public, universal and national pharmacare program.

The difference between that and some kind of piecemeal, for-profit pharmacare program is quite clear. We know with the piecemeal for-profit pharmacare many people are left out, and the costs are much more expensive. The reality from the Parliamentary Budget Officer is that Canadians as a whole would save $4 billion, moving to universal, publicly-administered pharmacare. Businesses would save about $6 billion. Provinces would save, because of the federal government's contribution, and Canadians who are struggling to pay for their medication that their doctors prescribed would benefit enormously from pharmacare. It would protect our whole country in the event of these kinds of pandemics that can occur.

I am going to tell two stories before I sit down to allow questions.

The first is about Jim. Jim sits outside the House of Commons in -30°C weather, in blizzards, and in the blazing sun, because he needs to beg to pay for his medication. He gets about $800 a month on social assistance, enough to pay for his room and his food. He cannot work because of his disability, and because of his need for that medication to keep him alive, he needs an additional $500 per month. It breaks my heart to see him every day. I make contributions, of course, and I think a number of other members of Parliament do, but in a country as wealthy as Canada, situations like Jim's should not exist. People should not have to beg in order to pay for their medication.

Another story is of a family that lives just a couple blocks from my home in Burnaby, B.C., just off Cumberland street. That family is paying $1,000 a month for heart medication that keeps the father of the family alive. They are having to make the choice, because of the escalating rents that we are seeing, of whether to keep paying for the heart medication or paying their rent. Canadian families should not have to make that choice.

Context : Debate
That is why we need national, universal and publicly-administered pharmacare, not piecemeal, not for profit, not much more expensive, but the kind of universal program that Tommy Douglas always advocated for and that the NDP and our leader is proposing today.

Context : Questions and Comments
Mr. Peter Julian: Madam Speaker, of course, as the member knows, Quebec already has in place a pharmacare program. It can be improved by having federal contributions, but it is up to the Quebec government to decide how to administer it and how to improve the program that already exists.

In other parts of the country where is no universal pharmacare there is a real interest by provinces. I met this morning with the Minister of Finance for the Province of Ontario, a Progressive Conservative. Their primary concern is addressing what has been a woeful cut in health care funding, which happened under the Harper Conservatives and has continued under the current government. What they want to see is full health care funding restored. Beyond that, of course, they are interested.

What government would not be interested in a program that allows, right across the country, for people to access the medications they need, that saves businesses money, that saves societies as a whole, a lot of money and allows for the bulk purchasing that we saw in New Zealand, which led in some cases to the cost of pharmaceuticals being reduced by 90%? This is a win-win-win. Yes, of course, some of the insurance companies want to maintain their profits.

The government and Parliament should be acting in the national interest and that is why we are calling upon all parliamentarians to vote yes on this motion today.

Context : Questions and Comments
Mr. Peter Julian: Madam Speaker, my brief answer is Tommy Douglas. He pushed the dream of national universal publicly administered medicare. The Conservatives, at the time, were raising the same concerns. There is not a single Conservative in this House today that would stand up say they want to get rid of universal publicly administered medicare, because even they understand the importance of having in place a program that benefits everybody. Even the Conservatives will be convinced that if we pass the motion over the next few days, Conservatives 10 years from now will stand up and say yes to universal pharmacare because they will see the benefits for their constituents and all Canadians.